ROYAL BRUNEI AIRLINES SDN BHD is looking for warm and caring individuals who enjoy
meeting people from different backgrounds and cultures to join our cabin crew team.
Requirements:
Benefits
dependants
Interested candidates who meet the above criteria should submit their résumés to the address
below, together with the following:
1.     Identity card and passport (photocopy)
2.     Birth certificate (photocopy)
3.     Educational certificates (photocopy)
4.     1 passport-sized photo
5.     1 full length 4R-sized photo
Cebu Branch Office:
PERT/CPM MANPOWER
EXPONENTS INC.
Room 221 CDC Bldg.
Osmeña Blvd., Cebu City
Tel: (032) 238-1534
Submission Deadline: 30 June 2010
Only shortlisted candidates will be called for interview and they should bring along the original copies of their identity cards, passports, birth certificates and educational certificates.
No fees to be collected, for manpower pooling only. Beware of illegal recruiters.
Posted by read2lead at 10:25 PM 4 comments: 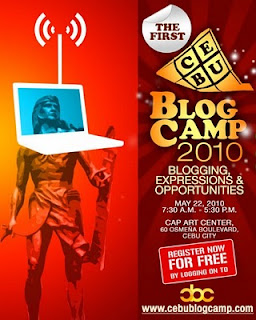 Oh yeah, it's the first Cebu Blog Camp and I will definitely be there, ; ). I admit I have neglected 2 of my blog sites (including this one) and I am looking forward to rekindling that fire to start blogging again by listening to various speakers during the 1-day event.

Jaypee Habaradas of JaypeeOnline.net
Cebu Blog Camp 2010 is an event organized by a group of Cebu Bloggers.
Posted by read2lead at 9:58 PM No comments:

I superlove this song performed by Kurt and Rachel of Glee. I think it's a Keith Urban original. Enjoy everyone, ; ).

Defying Gravity lyrics found at elyricsworld.com
Posted by read2lead at 6:07 AM No comments:

My last blog post about Air Philippines talked about my initial screening with them around the third week of March. After more than a month of waiting for them to call back, they texted me about this HR exam. Grace also received the same SMS and we were pretty much excited. The said exam was postponed for a couple of days and postponed again for the third time.

After 2 postponed exam dates, we finally had our exam around third week of March. I was not able to do a complete head count but we were more than 10 but less than 15; a third of the group were boys.

I met 2 lovely ladies; I'm not sure if they want their names posted here but let's just call them The lovely Js, ; ) These ladies are already waiting for their golden email from Emirates since they just had their final interview with the recruitment officers after the March 20 Assessment here in Cebu City. I was actually happy for them because I can really feel that they've been reaching for the same dream for a while since they have attended several cabin crew screenings (local and international) as well.

The HR exam was your usual IQ, spatial, math and vocabulary exam. There was also a sort of psychometric test after the main exam. It took us around 2 hours to complete it. After the exam, Mr. D then informed us that we will receive an SMS the next day if we aced it.

The next day was Saturday and no SMS came. I asked Grace and the other aspirants through SMS if they already received one. None of us have received it yet so we concluded that maybe, they haven't actually sent the "pass or fail SMS" that day yet.

Monday came and they texted me that I passed the exam and should be ready for the final interview with the assistant to the SEO within the week. The others also received the same SMS but one of the lovely Js didn't. According to her, she received the "you failed the exam" message. Unbelievable, huh? However, according to her, the Air Philippines exam was a little bit difficult than Emirates'. Anyway, I consoled her that there's no need for her to fret since she's already on her way to Dubai! ; )

On the day of the final interview, I found out that there were 2 aspirants missing, the Lovely J1 and another hotelier. I was called third for the interview. And here were the questions thrown on yours truly:

Tell me about yourself.
Why should we hire you?
What do you think are the responsibilities of a flight attendant?

I was instructed to stand up and the assistant to the SEO inspected my elbows and legs, just like in the initial screening. Mr. D was also there listening and taking down notes.

After everyone was interviewed, Mr. D called us and instructed us to form a huddle. He mentioned some last names (mine was not included) and told us that those called should stay for further instruction. Those who were not called are not to continue with the process anymore. Grace and Lovely J2 made it! There were 3 of us that were sent home. The other 2 told me that they were requested to speak in Tagalog and they had a hard time with it. Grace told me that they were already instructed to have their medicals.

While contemplating on where I went wrong, I have to admit that I was not satisfied with my answers. I was also not physically at my best due to lack of sleep the night before because Morpheus, the Dream King decided not to let me sleep. Okay, enough babbling now. These excuses may sound lame but I need to rewind the scenes again so I'd know why they didn't hire me.

On a lighter note, I heard from the grapevine (of course PEX) that Air Atlanta had their cabin crew screening last month here in the city at the Waterfront Hotel. However, I know of no one who was able to go there and experienced it first hand. Too bad, I was not able to get hold of information about it. If I had, I would have been there, ; ).
Posted by read2lead at 7:13 AM 6 comments:

My Twin Sister is already a Cabin Crew!

A few hours ago, I just found out that today is the last day of my "twin sister" in the office since she is joining Cebu Pacific as a cabin crew. My co-workers in my part-time job call her as my twin sister. According to them,  we both have Lucy-like (Lucy Torres) physical attributes and they call me little L2 and they call her L1, ; ).

We're not friends though since she's from a different team and her station is like 10 rows away from me. However, we smile at each other every time we meet in the pantry, hallway or elevator. One time, her teammate mistake me for her in the elevator. We also dress the same way and we both have this trademark of always wearing nude and flat sandals, ; ).
Even though I didn't have the chance to speak to her, I hope she does well with her new job. And I'm still hoping I'll follow her soon and get the chance to talk to her. This time around, it would be in the airport in our uniforms, ; ).

And I would like to congratulate my good friend Grace for making it to the final interview of Air Philippines. I will be talking about it soon in a separate post. Grace, it's your time to shine!
Posted by read2lead at 9:54 AM 4 comments:

I don't know where I got this one but found it a  few days ago while cleaning my desktop. I hope this will inspire us all, not just in our dream to fly but to life, in general.


The results will come.

Though each effort does not bring an immediate result, keep going. The results will come.
Every achievement requires many efforts. Those individual efforts combine with each other to bring the desired result.

So keep going. Keep adding one effort on top of the ones before it.

And all the while, learn. Learn what works and what does not, and adjust your efforts to become even more effective.

Persistence is the way you prove you really want it. Persist, and you will have it.

-- Ralph Marston
Posted by read2lead at 1:59 AM No comments:

Last night, I had one of my boyf's pep talks in relation to me not getting an email from IPAMS for that Emirates prescreening.

Over cup of coffee, he enumerated things that he thinks I should improve on. I went home last night a little bit hyper (maybe it's the coffee) and ended up staying awake the whole night so I decided to do some freelance work instead.

Thanks to the boyf for the enlightenment and to those fellow Cebuanos who got the email, I really hope you get in because I know how it feels to want it so much and not a day passes without you thinking of that dream.

And I heard there's another QR OD this April in the city. Isn't it great? But as what the boyf told me last night, chance favors the prepared,  ; ).
Posted by read2lead at 1:16 AM No comments:

read2lead
I'm a registered but not practicing nurse, I write for a living instead.